I never intended to run a marathon (due to concerns shared in my last post).  So when I found myself signed up for one, I hadn’t thought about what to expect.  Each run brought a new discovery.  These were some of my favorite discoveries: 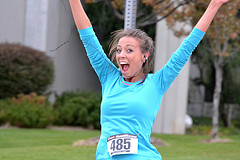 It was my first double digit (10 miles+) run.  After nine miles, giddiness overtook me.  Despite being on a crowded public trail, I couldn’t resist.  I NEEDED to celebrate.  My arms rose into the air, and I started fist pumping and yelling “I just ran 10 miles!”  People probably thought I was a nut job.  But I was thrilled.  For days I kept thinking, I actually ran 10 miles this week!  The confidence I gained from running, benefited every aspect of my life.  My performance at work improved.  I felt STRONG!

When I first started training, I made an accidental discovery.  My boss couldn’t reach me while I was running!  I carried my electronic leash (a.k.a. my smart phone) 24/7 everywhere, but it seemed rare that anyone bothered me during a run.

Between the silence and the beauty in watching the world wake up every morning, running freed my mind.  It was like my Kryptonite.  Some of my best ideas and moments of clarity occurred on my runs.

#3 – Running for a cause is highly motivating.

One of the toughest runs I have ever completed was on September 11th; it was my first 18-miler.  Work had exhausted me.  At mile 10, it started to pour rain.  At mile 12, my mp3 player died (I think it drowned).  I had nothing but my thoughts, so I thought about why I was running.

Nick was a young firefighter who died on September 11th.  Nick loved sports, yet he would never have the opportunity to run a marathon, like I had.  So many lives were destroyed that day.  It made me so angry.  Finishing that run and the marathon wasn’t much, but it was a way to honor Nick.  It was my way of saying “you don’t win” to the terrorists.  There was no giving up. 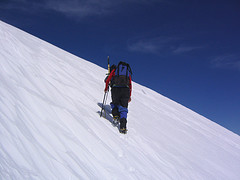 Yes, the marathon race is incredible!  It is akin to a wedding… all of the preparations resulting in celebration and happiness (and tired feet).  The training is more like a marriage – sticking it out through the good and the bad days.  It’s showing up when you don’t feel like it and reaping the benefits when you do.  Putting in the hard work every day is what makes you a marathoner.

#5 – Marathoners are a family.

On my longest training run, one of those veteran runners (the kind that look like a muscular Santa Clause) crossed paths with me a few times.  Eventually he plodded alongside and asked what mile I was on (mile 20, with two more to go).  Marathon Grandpa offered to keep me company.  He cheered me on and told me I was doing great.  I couldn’t talk much, so he just talked about how much I was going to love the marathon and how I would do well.

Throughout my running, I’ve encountered countless other Marathon Grandpas (and Grandmas, too).  They are everywhere, at the shoe store, in the doctor’s office and on the race bus.  Other marathoners always have “run a lot of miles in your shoes”, and they want to help you!

This was probably the biggest surprise of all.  Me, a marathon addict?  Five years ago, I would have laughed.  Even wilder – the idea that I would devote my career to helping other people run marathons!  They are both true.

During the marathon, little kids gave me high fives.  Strangers were calling my name (I recommend you put your name on your bib).  No one has ever treated me like that.  I felt like a rock star! After the marathon, I wanted that feeling again.  Others should know what this feels like, I thought!  It pained me to take a break from running (spoiler alert – post marathon you must take time off to recover).  I felt lost without a big goal.  I REALLY wanted to run another marathon.  So I did.  Then I did it again…and again…and now again.  Might it happen to you?

It’s exhilarating and humbling.  I can’t wait for you to experience it!  Leave me a comment below and let me know what you are most looking forward to about training for a marathon.  When you’re done, sign up to receive your free copy of the Kick-Start Guide to DIY Marathon Training when it launches.