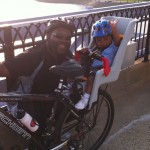 Travis and his son

“Another 60 minutes at the gym on the treadmill.  Another 6 miles on the books.  Apologies to the lady who took one look at me and changed machines.  I don’t know why you run.  I’m running because I’m tired of the big and tall store, because 33 is too young to be on high blood pressure meds, and because I want to be there when my 2 year old turns 52.  Please excuse my intensity, but I’m literally running for my life.”

Travis sparked an outcry with that Facebook post (in response to a gym-goer’s dirty look).  Why do you want to run?  Maybe it’s for your kids, like Travis.  Maybe it’s just for you.  Have a good reason for doing this.  You are going to have good training days and bad training days.  Your “why” will keep you going!  Here are some examples of other people’s running inspiration to inspire you:

Nina Parks-Taylor and Mark Taylor met on the way to the New York City marathon.  They married two years later at mile 17.  In 2011, they renewed their vows in the exact same spot.  They noted that their race time was a bit slower than usual, but who cares?  What a way to celebrate their love!

Fauja Singh of India just completed his 8th marathon.  He is 100.  As if that wasn’t enough, he broke running records for his age group in five different distances!  He only just took up marathoning when he was in his 80s…yes, you read that correctly, HIS EIGHTIES!  Go on with your bad self, brother!  That’s one way to retire in style.

I ran part of the 2010 New York Marathon with two giant Swedes who were running with their buddy, Bjorn, a testicular cancer survivor.  He bet them that if he could beat cancer, they would all have to run the marathon.  Take that, cancer!  He didn’t win the marathon, but he is WINNING at life!

I’ve shared my running inspiration for my first marathon with you.  Running a marathon for Nick’s team helped my husband and I heal after struggling for years with the helplessness we felt after September 11th.

Tim ran 26.2 miles and pulled over to the side where his girlfriend, Lauren, was cheering him on.  He dropped down on one knee (I have no idea how he had the strength!), whipped out a ring and proposed.  The man ran 26.2 miles for Lauren!  She said yes!  How’s that for chivalry?

Tim proposing to Lauren during the 2009 New York Marathon

P.S. After a year off for wedding activities, Tim is running a marathon again this year!

The Run for Hope

With so many mining catastrophes as of late, Edison Pena was a ray of light.  He logged several miles a day and dragged pallets for strength training while trapped in a tiny 1000 yard corridor in a dark, dusty mine shaft.  He “wanted to show God that [he] wanted to live”.  In doing so, Edison gave his fellow miners and the rest of the world hope, too.

After being rescued, Edison was invited to run the 2010 New York Marathon.  It was impossible not to cheer for him.  Fighting through every step (despite a knee injury and minimal training), he was perseverance personified.  They played Elvis (his favorite) when he crossed the finish line.  He WAS running inspiration!

The “Look at Me Now” Run

I’ll admit, I was hell-bent on beating Jared Fogle, aka “The Subway Guy” (don’t worry, I did) in the 2010 New York Marathon.  Nonetheless, his story is pretty amazing.  After dropping a massive amount of weight by eating at Subway every day, he’s gone on to be a television spokesperson and run a marathon.  What a way to announce to the world that you are feeling better than ever.

Recently, Amber Miller completed the Chicago Marathon (using a run/walk approach) while 38 weeks pregnant.  Yikes!  Seven hours later, she gave birth to her daughter, June.  She also completed a marathon while pregnant with her first child.  Is this for everyone?  Probably not.  Still, what a story for Amber’s kids.  How many people can say that they ran a marathon before they were born?

It’s impossible to miss the myriad of marathoners who are running in memory of a loved one on race day.  26.2 miles gives you a lot of time to read people’s shirts.  Their stories are touching.  Is there someone that you could run for as a way to honor their memory?