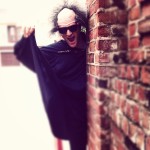 There are three boogeymen that make most marathoners cringe.

Now, I was terrified of the boogeyman when I was little.  I often woke in a panic, thinking that I spotted the boogeyman. Dad would dutifully help me hunt around and there was usually a reasonable explanation – like my escape artist hamster, Houdini.  It was always less scary with the lights on.

So you can imagine how dismayed I was to find out about the marathon boogeymen.  But as with all boogeymen, they’re a lot less scary when you see them in the daylight and know what they’re about.  Let me introduce you.

Meet the wall.  He usually lurks between mile 16 and mile 22, but he’s unpredictable.  Sometimes he stays in hiding altogether or just lets you see his shadow. He specializes in mind games.  He loves to toy with runners who are alone or unprepared.  Not nice! 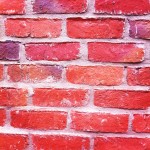 Luckily, we have an understanding of what causes the wall:

With the proper resources and preparation, research suggests that we should be able to avoid the wall.  At a minimum, you can train to endure and break through the wall.  Check out this Endurance Calculator to get a better sense for the dynamics of preventing the wall.

Boogeyman #2:  Chafe (and his cousin, blister) 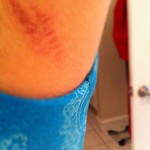 Chafed under arms from a long run

My husband and I use to play a game after long runs.  The “lucky” one got to shower first.  The other one waited for the screams and cackled at the “lucky” one’s misfortune.  Harsh, right?  Why the screams?  Let me introduce you to Boogeyman #2, chafing.  I pray that you’ll never have to see this on yourself (apologies for the graphic image).  Unfortunately, I’m certain you will.  Chafing is caused by a combination of moisture and rubbing of materials against the skin.  Blisters result from similar conditions (typically on the feet).  Common chafed areas include between the legs, around the armpits, under the chest and in the nether regions (sounds fun, right?).  Imagine running 10 more miles with burning inner thighs.  You get the picture.

This boogeyman is somewhat unpredictable, too.  You might not chafe at all, and then the same clothing could literally rub you the wrong way on another day.

Mercifully, although chafing is uncomfortable for a few days, it disappears fairly quickly.  Check out the gear page for more details on preventing and treating chafed skin. 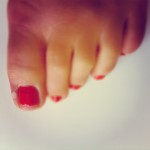 Ah, the most elusive and scary boogeyman of all…injury.  Injury is the worst nightmare of every marathoner.  It could mean the end of your training or at least a temporary halt.  The good news:  most marathoning injuries are minor.  The scary news:  some marathoners experience repetitive use-related injuries that are chronic and difficult to detect.  We’re not talking triple bi-pass, but I’ve known a runner or two that has ended up on crutches for a few weeks.

Reduce likelihood of injury by: